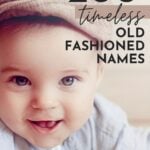 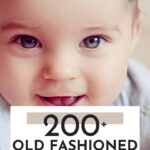 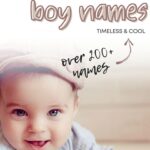 Searching for the perfect old fashioned boy names is a daunting task!

But, thankfully you’re here, as we’ve put together the ultimate list of old boys names to inspire you!

One of the best things about choosing old fashioned baby boy names is that you know they have stood the test of time and proven their worth!

Old baby boy names are more than just a string of letters, they are steeped in history and meaning!

There really are so many timeless boy names to choose from!

And if you love these old fashioned male names, make sure to check out these Biblical boy names, vintage boy names, and last names as first names! Or even these French boy names!

– of Hebrew origin meaning ‘one who laughs’

– of German origin meaning ‘soldier of the people’

– of Scandinavian origin meaning ‘spear of the gods’

– of German origin meaning ‘to rule’

You may also like these middle names for Michael!

You may also like these middle names for John!

Finding the perfect boy old fashioned names is never easy, but we hope we were able to help inspire you to find a boy name that you love!