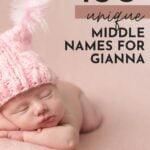 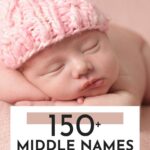 Want to find the best middle names for Gianna for your sweet baby girl?

Then we have you sorted with our ultimate list of the best middle names that go with Gianna!

Gianna is a beautiful name of Hebrew origin meaning ‘God is gracious’. So, if you’ve got your heart set on the name Gianna then we want to help you find the perfect middle name for Gianna to go with it.

So, you’re sure to find a bunch of middle names for Gianna that you’ll love on this list!

Finding the perfect middle names is never easy but we hope we were able to help inspire you to find a middle name that you love!