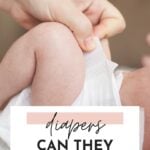 In this expired diapers guide we talk all about the expiry date of diapers and the key signs of an old diaper!

Let’s face it, diapers cost parents an arm and a leg, so when you find good deals, it’s natural to stockpile as many as you can.

Your baby will eventually use them, and if not, you can save those diapers for another baby.

But, that leaves you wondering – do diapers expire?

When I had my first child, I used coupons all of the time, and I scored boxes of diapers for as low as $1.

I overestimated by a large amount and bought more diapers than my child needed in my excitement at my deals. We had no plans to have a new baby within the next two years, so I started to wonder if diapers lasted for multiple years.

To my surprise, I found out that diapers don’t have the lifespan I expected. Here is what I learned.

And if you have more unused diapers than you need, here’s some things you can do with extra diapers!

If you want to know do diaper expire? Then you will need to take a close look at your diaper packaging; you’ll be surprised to learn that most do include an expiration date.

In general, manufacturers recommend a lifespan of two to three years, but since diapers are primarily made of paper and plastic-based materials, they should last longer than that.

A diaper expiration date doesn’t mean that a diaper expires. Instead, these are similar to a best-used-by date.

If you go over this date, nothing crazy happens that causes your diapers to stop working. This date means that the diapers work until that date; any date after that date could cause a decrease in the function.

You may also want to check out our guide ‘does baby oil expire?‘

WHEN DO DIAPERS EXPIRE?

Most diaper manufacturers recommend that parents use the diapers within two years of the purchase. That’s a big time frame considering many toddlers start to potty train between two and three years old.

Some manufacturers say that their brand has no expiration date, claiming their diapers work the same no matter how old they are.

WHY DO DIAPERS EXPIRE?

Diaper expiration dates are different than the expiration on your gallon of milk. If you use an old diaper, nothing terrible will happen to your baby, but the diaper might not function as well as it should.

So why do diapers expire? Manufacturers set an expiration range because it ensures that you use your diaper within the right timeframe to receive all of the benefits you want to have. Once this time is up, manufacturers don’t guarantee that diapers operate with the same performance as they advertise.

For example, if you use a diaper that advertises for 12-hour coverage, after the expiration date, that coverage might be less than 12-hours.

An old diaper ages, leading to some problems, such as decreased absorbency, discoloration, leaking, and fragrance change.

THE PARTS OF A DISPOSABLE DIAPER

Have you ever took a look at a disposable diaper and wondered what was inside of it?

Disposable diapers consist of four layers, and each layer has a different purpose and materials. Diapers are more complicated than you imagine.

The first layer is the absorbent top sheet, which touches your baby’s skin. This layer is made of polypropylene and polyester. If you rub your hand over this layer, it’s soft, breathable, and prevents leaks.

The most important layer is the absorbent core. Without this, diapers would overflow, leaving a trail of messes for you to clean up. An absorbent core is made of fluff pulp and chemical crystals, known as a super absorbent polymer (SAP). SAP is what makes disposable diapers revolutionary.

Fluff pulp contains natural ingredients, such as wood pulp, corn, or wheat-based materials. This component aims to distribute the liquid across the entire core while the polymer absorbs and holds onto liquid up to 30 times its weight.

The cover stops the liquid from coming out of the absorbent core. This layer is made of waterproof material, letting your child wear clothes without getting wet. Outer layers are made of polypropylene and polyethylene, making them soft, durable, and breathable.

All diapers have some fastener tape that keeps them closed. Many have waistbands with stretch panels and leg cuffs. These parts are made with plastic fiber and elastic, creating an ideal, comfortable fit for your baby.

THE SIGNS OF AN OLD DIAPER

Unless you know the expiration of all of your diapers, you need to know how to identify an old diaper. Here are some of the signs.

Think about how a book turns yellow after several years. Paper products lose their color when exposed to oxygen for a long time.

The same thing applies to diapers because it’s a mix of paper and plastic. Often, the patterns fade on the cover over time. Discoloration doesn’t affect the performance of the diaper; it’s a cosmetic issue.

Not all disposable diaper brands have fragrance, but some like to include it because they believe the scent masks unpleasant odors.

Old diapers don’t smell as good as the new ones. While manufacturers aren’t positive about why this change happens, it’s more than likely due to the fragrance’s molecule breakdown.

Some parents note that not only does the scent start to disappear, but some deodorizers begin to have an unpleasant odor when using them. A change of fragrance doesn’t change how efficiently the diaper works, but no one wants to use a diaper that smells bad.

The chemical crystals inside the absorbent core help to suck up the urine and other liquids in the diaper. SAP even pulls moisture from the air and environment around them. This is why you might find an old diaper from a year ago in your car that feels like it’s partly filled with moisture when you know it’s unused.

This is what makes using an old diaper risky. A decrease in absorbency means that the diaper isn’t as efficient as it was at the start. It won’t last as long, and you’ll need to change your baby’s diaper more often.

Spandex or other polyester materials make up the elasticity of the leg cuffs and waistband. These materials are resistant to heat and moisture, but many manufacturers include rubber or latex, which break down over time.

Leg cuffs aren’t just for looks; they help to reduce leaks and diaper explosions. If the elastic is loose, diapers don’t stay in place, sliding right off your baby’s body.

Talk about a mess!

CAN YOU USE AN OLD DIAPER OR EXPIRED DIAPER?

Using an old or expired diaper isn’t harmful to your diaper, and none of the components of a disposable diaper spoil or truly expire.

Most of the time, the changes that happen in an old diaper are mild and won’t cause serious issues. The worse that happens is that you need to change your baby’s diaper more often, or the diaper leaks all over your baby’s clothing.

Even new diapers leak from time to time; it’s part of parenting.

If you have old diapers, check for leaks often and make sure it fits your child well. Look for any rashes or itchiness that might be due to changes in the diaper. Otherwise, it’s safe to use an old or expired diaper.

HOW TO PROPERLY STORE DIAPERS

The best way to ensure your diapers last their recommended lifespan or longer is to store disposable diapers properly. It’s natural for all diapers to lose their efficiency over a few years, but preservation is possible.

Here are some tips for properly storing diapers.

1. Store Them in The Right Place

The main factors that cause a diaper to age are moisture, heat, and light. Storing your baby’s diapers in a dark, cool, and dry place. This is the best way to store diapers.

2. Keep The Diapers in the Box

When you buy a pack of diapers with multiple bags wrapped in plastic, store them in the cardboard box the way that they come. Doing this prevents exposure to air and moisture.

After you open a pack of diapers, keep them wrapped in the plastic that comes with them. Use tape to shut the plastic, limiting exposure to air.

4. Use a Vacuum Sealer

If you bought a lot of diapers on sale and want them to last for your next baby, consider using vacuum seal bags to create an airtight seal. Not only does this reduce the space needed to store diapers, but it helps them last for years to come.

Nothing lasts forever, not even disposable diapers. To answer the question – do diapers expire – the answer is yes, they have a best-by-date that ensures the proper function of the diaper. However, using an old diaper won’t hurt your baby; watch for leaks, and everything will be fine.

And if you’re looking for more great diapering guides, then check out these guides on best diapers to prevent blowouts, best overnight diapers, different uses for diaper rash cream, and do baby wipes expire.