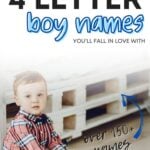 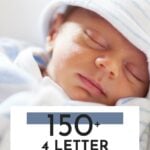 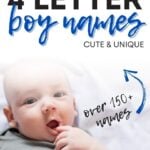 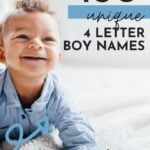 Then you are going to love our ultimate list of four letter boy names!

Let’s face is, as a parent naming your child is one of the most important (and often difficult) tasks you get to do!

After all, there are so many names to choose from, and so many things to think through before naming them.

And with so many options, it can be tricky, especially if you are looking for a short boys name, let alone boys names with 4 letters.

That’s why we’ve put together this list of boy names with four letters.

With cute name like Mylo, Hugo, Obie, and Toby.

And strong 4 letter boy names like Ivan, Hank, and Colt!

You’re sure to find a 4 letter name you’ll love!

– of Dutch and German origin meaning ‘messenger or  representative’

– of Anglo-Saxon origin meaning ‘from the warriors town’

– of English and Hebrew origin meaning ‘God will increase’

– of Scottish origin meaning ‘an island’

Love the name Luca? Then learn more about it with our Luca name meaning guide! And pair it with these middle names for Luca!

You may also like these middle names for Liam!

Finding the perfect 4 letter boys names is never easy but we hope we were able to help inspire you to find a boy name that you love!

And if you’re still looking for more great boy names, try these country names for boys, boy names that start with A, Biblical boy names, and strong boy names.