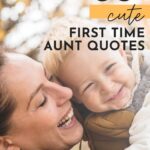 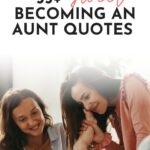 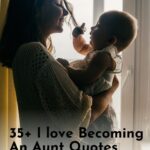 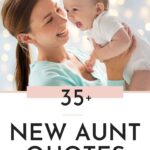 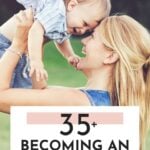 Are you are looking for the best quotes about becoming an aunt for the first time?

Then let these quotes on being an aunt inspire you or any first-time aunt in your life!

The joy of being a  new aunt and having your first nephew or niece whom you can love and care about is one of the most exciting times in any sister’s life.

Being an aunt means you get to  spoil your sibling’s kids and cherish all the playtime and cuddles you can!

You get to help make their childhood be full of fun and laughter, whilst getting to do one of the best jobs in the world…Being their cool aunty!

So let’s celebrate that special role aunties have with these happiness is becoming an aunt quotes!

And if you like these new aunt quotes you’ll also love these uncle to be quotes, sister quotes, and quotes about siblings and the love they share.

Best Quotes About Becoming An Aunt

‘An aunt is a safe haven for a child. Someone who will keep your secrets and is always on your side.’ — Sara Sheridan

Editors note: You are welcome to share and use the original becoming an aunt quotes and images contained below. Please give credit back to our page. Non-commercial use only.

We hope you enjoy these quotes about being an aunt for the first time as much as we do.

If you are wondering how you can put these new aunt quotes to good use, we suggest using them as caption for your social media pictures.

We also love using these new aunt quotes to create sweet aunt gifts, as well as to write meaningful cards for your aunt.

I Became An Aunt Today Quotes

‘There’s this little boy who stole my heart. He calls me Aunt.’

‘I never knew so much love until someone first called me Aunt.’

‘Becoming an Aunt is like a reward in life because my job is less work and more fun playtimes.’

‘On the day that you were born, the angels sang for joy, while I dance.’

‘I will never forget the day I became an Aunt.’

Becoming An Aunt For The First Time Quotes

‘Becoming an aunt is like finally meeting your soulmate.’

‘I am now stepping into my new role as the ‘coolest’ aunt.’

‘I thought love at first sight only exists in fairytales, but then I became an Aunt.’

‘Becoming an Aunt is nice. But ’being’ an Aunt is definitely more fun.’

‘Becoming an Aunt made my life sweeter.’

‘My days couldn’t be any brighter the day I became an Aunt.’

‘The day I became a first time Aunt, all I could think of is how to make this little baby happy everyday.’

‘Being a sister is an honor. Being a new aunt is priceless.’

‘Yes, I am the new Aunt who cannot stop staring at her new niece.’

‘Let the endless babysitting and best friendship of all time begin.’

‘Being an Aunt became my most favorite role the moment this child came into the world.’

‘I am going to be an Aunt and I think I will win the coolest Aunt title.’

‘Aunts are the ones that stand beside Moms when nieces and nephews enter the world.’ – Karen Moore

‘I could feel true happiness when I became an aunt of this adorable child.’

‘Any woman can be a sister. But it takes someone special to be a new Aunt.’

‘Happiness is becoming the aunt you’ve always dreamed of being.’

‘I may have not carried you for nine months, but I will spend the rest of my life loving you, protecting you, and doing whatever I need to make you happy.’

‘My Aunt’s intelligence had given me hope, and I was determined at once to know every thing.’ – Mr. Darcy

‘Becoming an Aunt for the first time is daunting, but when I held you in my arms, I knew that this was the start of many beautiful moments together.’

‘Don’t disturb me, I am busy being an aunt.’

‘Everyone has to experience their first time about everything. I experience my first job, first time to travel abroad, first love, and all the firsts. I get to be a first time aunt and it excites me so much.’

There is something so special about becoming a new aunt!

We hope these new aunt quotes and aunt baby quotes have put into words all those new aunt feels!

And if you’re looking for more great quotes, then check out these best aunt quotes, nephew quotes, and niece quotes.