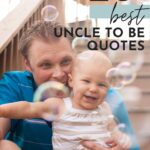 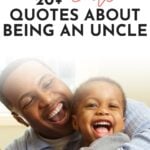 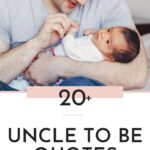 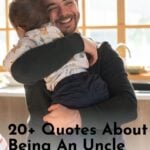 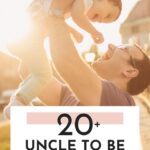 Are you are looking for the best uncle to be quotes about being an uncle?

Then let these becoming an uncle quotes inspire you or any first-time uncle that you know!

They say being an uncle is fun because you get to be a little kid again and relive your best childhood memories with your nephews or nieces.

That said, becoming an uncle for the first time means more than just fun and games.

It means you get to play a special role in your niece or nephews life, that only you can fill!

So, to celebrate that special bond that exists only between an uncle and his niece/nephew we have put together this list of the best proud uncle quotes!

Here you’ll find the quotes about being an uncle, I became an uncle today quotes, uncle quotes, national Aunt and Uncle Day Quotes, niece quotes from uncle, and nephew quotes from uncle celebrate the bond that uncles and aunties have with their sibling’s kids.

And if you like these uncle sayings, you’ll also love these aunty quotes and quotes about becoming an aunt for the first time.

Best Uncle To Be Quotes

‘The best thing that will happen to me this year? I will be an uncle for the first time.’

Editors note: You are welcome to share and use the original proud uncle to be quotes and images contained below. Please give credit back to our page. Non-commercial use only.

Quotes About Being An Uncle

We hope you enjoy these becoming an uncle messages and sayings as much as we do.

If you are wondering how you can put these best uncle quotes to good use, we suggest using them as captions for your social media pictures.

We also love using these uncle to be quotes to create becoming an uncle gifts, as well as to write meaningful new uncle cards and messages.

‘You can tell your uncle stuff that you could not tell your dad. That is kind of the role of an uncle. I feel very much like a father sometimes but sometimes I feel like a teammate.’ – Dusty Baker

‘I levelled up to being an uncle.’

‘Only the best brothers get promoted to Uncle.’

‘In few days, I will be an official member of the proud Uncle club!’

‘Becoming an Uncle is nice. But ’being’ an uncle is definitely more fun.’

‘No family is complete without a proud uncle.’

‘When my niece first called me uncle, I felt old. But now, I feel incredibly lucky to be one.’

‘Uncles are there to help the child get into mischief that they haven’t thought of yet.’

‘I am excited to be called the “Cool Uncle”.’

‘Happiness is being an Uncle.’

‘I was so excited to hear my sister was having a baby, because it meant I was finally going to become an uncle.’

‘Being an uncle brings me utter joy.’ – Russell Tovey

‘The great thing about being an uncle is being able to give the kid back when they start crying.’ – Rob Rofle

‘I am now stepping into my new role as the ‘best Uncle ever’.’

‘Being a brother is an honor. Being a new uncle is priceless.’

‘I love being an uncle.’

‘I didn’t think I would love anyone as much as my dog. Then I became an uncle.’

‘Happiness is getting promoted to uncle.’

There is something so special about becoming a new uncle!

We hope these new uncle quotes and uncle baby quotes have put into words all those new uncle feels!

And if you’re looking for more great quotes, then check out these best uncle quotes, nephew quotes, and niece quotes.