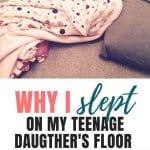 I slept on my teenage daughter’s bedroom floor last night.

It wasn’t a slumber party.

It was just all I could do.

She’d gone to bed early, as she does on nights, she has that option, which aren’t many.

I’d gone to bed early, too, but was awakened around 10 by my mom radar, which is almost never faulty.

Sure enough, light and sobbing were coming from her room.

I went in to find her sitting up in bed, an assigned-reading book from one of her classes open on her lap and tears streaming down her face.

She wasn’t sleeping because she was so tired, she knew she should be sleeping but she was stressed about needing to sleep, which was keeping her awake.

Also, her typical teenage body clock–“let’s stay awake until midnight and get up at 10!”–was not doing her any favors.

There was nothing I could do.

She’d taken some medicine for a cold, so I couldn’t give her anything else.

She knew all the mental games and relaxation tricks.

She’d already tried doing something else.

So, I Offered The Only Thing I Could: My Presence.

I made up a bed on her cushiony carpeted floor, told her I’d stay there in case she thought of anything else I could do, and we both went to sleep.

This is how it is with big kids: the older our children get, the more the things they need comforting from are not things we can do much about.

When they don’t have friends, we can’t set up playdates for them.

When someone breaks their heart, we can’t (and shouldn’t) go try to talk them into loving our baby again.

When they don’t get the job or the part or the spot on the team, we can’t (and shouldn’t) plead their case with the employer or director or coach.

Their hurts are usually internal, so we can’t just slap a bandage and a kiss on them.

So, We Do What We Can, Which Is Hover Nearby, Waiting To Offer Our Presence.

Our cell phones are on and charged, in case they want or need to text.

We’re ready for a midnight French-fry-and-milkshake run if their hearts get broken.

We drive to campus to bring them home for one day of a weekend when they need a night in their own bed.

We wait up in case they want or need to talk when they get home.

We show up for games and performances and ceremonies, even when they drive themselves there ahead of time and stay after we’ve left and barely acknowledge us when they see us in the stands or the seats.

We make them pancakes at 10 p.m. or leave a sub in a tote with an ice pack in their car for them to eat in between after-school activities.

We Aren’t Solving Their Problems.

We aren’t doing their work.

We aren’t fixing their relationships.

We aren’t making up for their disappointments.

But we’re letting our big kids know that in all of these, they’re not left on their own.

We are worrying and crying and hoping and cheering with and for them.

We are watching and waiting for our chance to smooth the rough edges, to fill in some gaps.

We’re waiting and ready to be there: on the phone, in the stands, in the car.

And sometimes, on the floor.