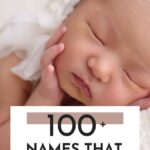 Are you trying to find the best baby names that mean shy for your sweet baby?

Then, let us help with our ultimate list of the best baby names meaning shy is full of names related to shy to inspire you!

The word shy is often be associated with being nervous or timid, but don’t underestimate someone just because they are shy!

People who are seen as shy and timid tend to put care and thought into their words and actions.

They are mindful and mean what they say. They can stand back and take in the whole picture before they make a decision.

And their thoughtfulness and empathy to them that makes them so wonderful to know.

From boy names meaning shy like Lamis, Tiombe, and Tacy.

To girl names meaning shy like Linda, Arava, and Shye.

To names that mean shy you’ll love like Shiloh, Shanti, Jeong, and Vieno.

We’ve done the hard work so you can easily find baby names meaning shy that you’ll love on this list!

– of Latin origin which translates to ‘gift’

– of Italian origin It translates to ‘tender’ and ‘soft’

– of Portuguese and Spanish origin that means ‘beautiful’, ‘mild’, ‘soft’, and ‘flexible’

– of Hebrew origin meaning ‘one who is like God’

– of Sanskrit origin meaning of ‘tranquility’, ‘peace’, and ‘quiet’

– of Indian origin meaning ‘one who walks quietly’

– of Norse origin that means to be ‘cautious in war’

– of Turkish and Persian origin meaning ‘delicate’ and ‘coy’

– of Latin origin meaning ‘be silent’

– of Greek origin meaning ‘flower of the Gods’

– of Finnish and Estonian origin meaning ‘quiet’ and ‘silent’

– of Chinese origin that means ‘gentle’, ‘quiet’, and ‘still’

– of native American origin meaning of ‘the quiet one’

– of South African origin meaning ‘be humble’, ‘shy’, and ‘quiet’

– of Sanskrit origin meaning ‘protected one’ or ‘shy one’

– of Japanese origin meaning ‘gentleness’, but also ‘superiority’ and ‘excellence’

– of Hindu origin meaning ‘one who sees quietly’

– of Zimbabwe origin meaning ‘you have been humbled’

– of African origin meaning ‘the quiet one’

Without a doubt, choosing a baby name is one of the biggest decisions that new parents will make.

But we hope we were able to help inspire you to find a baby name that you love!