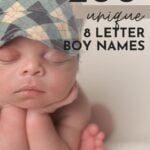 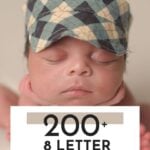 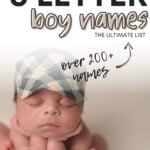 Have you been looking for the best 8 letter boy names for your bundle of joy?

Well, get ready as the name for your sweet baby boy may just be on this ultimate 8 letter baby boy names list!

We want to help you find a baby boy name that you just adore!

And what better way than with some eight letter boy names that pack a punch!

To cute names like Brentley, Marshall, Sterling, and Tristian.

To names you’ll love like Charlton, Jeremiah, and Winfield.

We’ve brought all the best 8 letter male names right here to your fingertips!

And if you love these 8 letter male names, make sure to check out these three syllable boy names, 7 letter boy names and long boy names! Or any of these unique names on our 1000+ cool boy names list!

– of French origin meaning ‘with moustaches’

– of Latin origin meaning ‘belonging to a lord’

– of French origin meaning ‘from Germany’

– of Latin origin meaning ‘staff of the Geats’

– of Hebrew origin meaning ‘God has given’

– of French origin meaning ‘bright-shining one’

– of Gaelic origin meaning ‘son – of the fair warrior’

– of Slavic origin meaning ‘victor of the people’

– of English origin meaning ‘dweller at the river-field’

Finding the perfect boy 8 letter names is never easy, but we hope we were able to help inspire you to find a boy name that you love!